Did you know that June 15th is Elder Abuse Awareness Day?

I was blessed to grow up knowing not only all of my grandparents but all of my great grandparents.  It has always been one of my professional goals to see to it that seniors are protected.  One way that I hope to further that goal is by bringing awareness to the public at large regarding treatment of our seniors.  Please take a few minutes out of your busy schedule to read the below information and share it with those you care about.

Abuse in Later Life:  AN OVERVIEW AND PRACTICAL STRATEGIES FOR SUPPORTING OLDER VICTIMS*

Strategies to support older victims of abuse are numerous and varied, and implementing them requires an integrated approach.
BY BONNIE BRANDL, MSW AND JUANITA DAVIS, JD

Elder abuse is a hidden epidemic in the United States. Research indicates that elder abuse affects approximately five million Americans each year, though that number is believed to be a gross underestimation of the problem nationwide (Connolly, Brandl, and Breckman 2014). For every case of elder abuse that is reported, another twenty-three remain undisclosed. (Lifespan of Greater Rochester, Weill Cornell Medical Center, New York City Department for the Aging 2011). As the population continues to age, reports of elder abuse will likely increase. With this growth in reporting, the numbers of victims seeking support from professionals who help older adults will also likely increase.

This article begins with an overview of the issues of elder abuse and abuse in later life, focusing specifically on cases of abuse perpetrated by a
trusted individual who uses power and control tactics against the victim. Subsequent sections discuss common dynamics and indicators of abuse in later life and the unique challenges facing older victims. The article concludes by providing practical strategies for professionals who work with older victims of abuse.

In 2014, the U.S. Department of Justice with support from the Department of Health and Human Services Center on Elder Abuse, developed the Elder Justice Roadmap Report, a national strategic plan to combat elder abuse (Connolly, Brandl, and Breckman 2014). The report defines elder abuse as any “physical, sexual or psychological abuse, as well as neglect, abandonment, and financial exploitation of and older person by another person or entity that occurs in any setting (e.g. home, community, or facility), either in a relationship where there is an expectation of trust and/or
when an older person is targeted based on age or disability.”

Elder abuse can take multiple forms and different types of abuse can co-occur. It affects all groups and communities and can involve a variety of relationships, although a significant portion is perpetrated by spouses or intimate partners, adult children, extended family, or caregivers
(National Center on Elder Abuse 2004). Perpetrators of elder abuse often use a pattern of coercive tactics designed to achieve and maintain power and control over a victim (Pillemer and Finkel- hor 1988). Elder abuse perpetrated by a spouse, partner, family member, or other trusted individual who uses these tactics against a victim is known as abuse in later life (Spangler and Brandl 2007).

Some instances of abuse in later life can manifest throughout a decades-long partnership and remain a part of the relationship into older age. In these cases, the abuse resembles what is typically termed domestic or intimate partner violence and is often called “domestic violence grown old” (National Clearinghouse on Abuse in Later Life 2016, 2). In addition, abuse in later life may occur in the context of a new experience of abuse in either a long-term or new relationship between a perpetrator and an older victim. Less frequently, perpetrators may develop mental or physical
health problems that manifest in unprecedented aggressive and/or violent behavior. This form of abuse is called “late onset domestic violence.”

Abuse in later life can also be perpetrated by individuals other than spouses or intimate partners. Expressly, any individual who has an ongoing trust-based relationship with a victim can perpetrate abuse, including adult children, grandchildren, extended family members, and in some cases, caregivers. Notably, abuse committed by strangers or others who do not have a trust-based relationship with the victim is not included in the definition of abuse in later life.

As noted previously, in most cases of abuse in later life the dynamics of power and control are present (Spangler and Brandl 2007). In these cases, a perpetrator’s abusive behavior can include bullying, threatening, manipulating, isolating, or exploiting the victim.  Abusers often use more than one tactic in the abusive relationship. Figure 1 illustrates some of the forms of abuse often used against victims of abuse in later life (National Clearinghouse on Abuse in Later Life 2011).

A common misconception in abuse in later life cases is that caregiver stress is often a root cause of the abuse (Spangler and Brandl 2007). In fact, what is often underlying a perpetrator’s abusive behavior is entitlement thinking patterns, which embolden the perpetrator to use any means to exert power and control over the victim, and power and control are the core dynamics in the abusive relationship (Bancroft 2002).

Indicators of Abuse in Later Life

The common indicators of abuse in later life are often analogous to those present in abuse cases involving younger victims. Figure 2 details some victim and abuser indicators and behaviors (Brandl et al. 2007).  Unique Challenges Facing Victims of Abuse in Later Life All victims experience tremendous challenges when dealing with abuse. At the same time, older adults face additional challenges unique to their abuse. For example, an older victim may experience acute isolation due to the aging or death of friends, family, and other support systems (Straka and Montminy 2006). 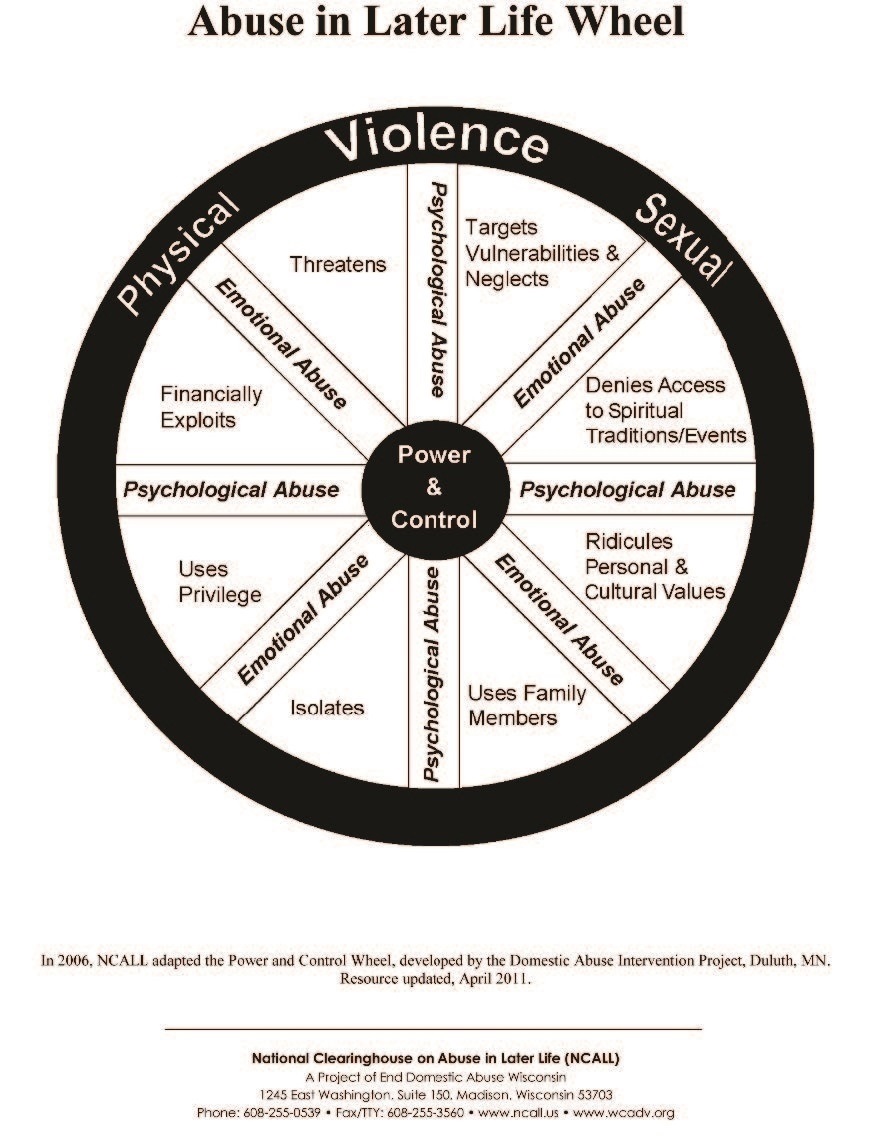 If an abuser is an adult child or grandchild, the older victim may experience any number of negative emotions about being abused by a family member.  In addition, an older victim may not be believed if they report abuse or fear losing decision-making abilities because of ageist ideas about victimization and capacity (Brandl and Horan 2002). Last, an older victim may have more limited economic or service options, or specific health or health care concerns vis-à-vis their younger counterparts (Spangler and Brandl 2007).

Older victims from marginalized communities may face additional challenges. For instance, older victims with disabilities, LGBT victims, immigrant
victims, and victims from communities of color may be reticent to speak about abuse for fear of being mistreated or misunderstood. Furthermore, victims from marginalized communities may have personal and/or cultural beliefs that dissuade them from reporting abuse (Women of Color Network 2008). They may also feel that services, programs, and systems are not designed to treat them fairly or address their specific social, cultural, or linguistic needs.  Practical Strategies for Supporting Older Victims of Abuse Build Rapport with Older Victims. Building a strong and effective relationship with an older adult who is a victim of abuse can play an essential role in abating any isolation or fear they may experience as a result of the abuse. Listening to a victim, using empathic and active listening techniques, and demonstrating respect for their decisions and worldview are all integral parts of that process. While older victims may not be amenable to speaking about their abuse specifically, they may be
open to speaking with someone who talks with them and can provide them with information on resources and available services. 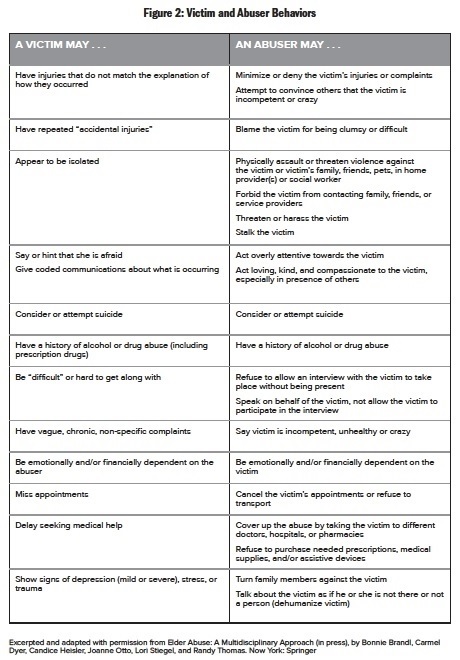 Understand Abuse Dynamics. Victims of abuse in later life often experience shame, guilt, or other adverse emotions.. These emotions can compound if an older adult is being victimized by their own children or grandchildren. The victim may feel a sense of parental responsibility, failure, or guilt about the behavior of their abuser or about the consequences of reporting the abuse. For these reasons, older victims may not wish to end their relationship with their abuser, instead wanting only for the abuse to end (Spangler and Brandl 2007).

Avoid Ageist Assumptions. Professionals working with older adults must be mindful of the role that ageism can play in how older individuals may be perceived and treated when they experience abuse. Ageist notions about an older adult’s capacity to comprehend abuse, to make informed determinations about what to do, and about their values related to abuse can all thwart efforts to support an older victim. Understanding ageism and avoiding judgment around an older adult’s choices are critical components of providing effective supports.

Make Referrals to Services. Connecting victims of abuse in later life to service providers and networks working directly with older adults are critical parts of providing effective support (National Clearinghouse on Abuse in Later Life 2013). Some referral options are explored in detail below.

Domestic and sexual violence programs provide crisis and long-term resources and supports including twenty-four-hour crisis line help, emergency shelter, peer-to-peer counseling, and support groups.  Many programs have services designed specifically for older adults, including those from marginalized communities. Program advocates provide confidential communications with abuse victims. Advocates are trained to recognize the dynamics of abuse and work with victims to empower them to regain control in their lives. Advocates can provide legal advocacy services or referrals and can also accompany victims to court or to health appointments as the victim requests. Advocates can also assist a victim in developing a plan for how to stay safe and seek help should they be in a dangerous situation (Spangler and Brandl 2007).

Adult Protective Services (APS) are state-authorized entities that provide support to both older and at-risk vulnerable adults who are in danger of being abused or neglected, or who are unable to protect themselves.  APS workers investigate reports and complaints of abuse, neglect, or exploitation. They can make home visits and provide case-management and referral services for community-based resources. Workers help
individuals with and without capacity, honoring the principle of self-determination when working with their clients (National Center on Elder Abuse 2006).

Other Services and Referrals

Some older victims may benefit from a referral to civil attorney or legal advocacy services to help them obtain a restraining order against their abusers or information about laws protecting victims of abuse. In addition, older victims from marginalized communities may benefit from a referral to culturally-specific programs which provide culturally and linguistically appropriate services and supports to victims within certain communities.

Bonnie Brandl, MSW, is the Director of the National Clearinghouse on Abuse in Later Life (NCALL) in Boulder, Colorado. She is a national leader and expert in the field of abuse in later life. Contact her at 303-494-1682, bbrandl@ncall.us, or visit www.ncall.us, www.endabusewi.org.

Juanita Davis, JD, is the Program Manager for the National Clearinghouse on Abuse in Later Life in Madison, Wisconsin. She provides training on abuse in later life and coordinated community response.  Contact her at jdavis@ncall.us, 608-237-6445, or visit www.ncall.us.

Bancroft, Lundy. 2002. Why Does He Do That? Inside the Minds of Angry and Controlling Men. New York: Berkley Books.

Connolly, Marie-Therese, JD, Bonnie Brandl, MSW, and Risa Breckman, LCSW. 2013. “The Elder Justice Roadmap: A Stakeholder Initiative to Respond to an Emerging Health, Justice, Financial and Social Crisis.” An initiative funded by the US Department of Justice with support from the Department of Health and Human Services. www.ncea.aoa.gov/Library/Gov_Report/docs/EJRP_Roadmap_and_Appendices.pdf. Accessed February 8, 2016.

Spangler, Deb and Bonnie Brandl. 2007. “Abuse in Later Life: Power and Control Dynamics and a Victim-Centered Response.” Journal of the American Psychiatric Nurses Association. Vol 12, no. 6 322-331.

Straka, Silvia and Lyse Montminy. 2006. “Responding to the Needs of Older Women Experiencing Domestic Violence.” Violence Against Women. Vol 12, no. 3 251-267.

*Many thanks to the CSA Society of Certified Senior Advisors for allowing Lynco Financial & Tax Services, Inc. to reprint and share this valuable and informative article with our clients.  Lynn has long been an advocate for seniors and has volunteered for several years in the State of Florida as a Long-Term Care Ombudsman, working to improve the quality of life of ill or vulnerable seniors and other who live in long-term care settings, including nursing homes, assisted living facilities and adult family care homes.